Viareggio Carnival: Carnival of Italy and Europe | History of the Carnival

The Viareggio Carnival has been considered the most important carnival in Italy and Europe for more than 140 years.

A spectacular event, giant allegorical floats created by fun poets parade along the seafront, in a whirlwind of colors, music, confetti and streamers, pure fun and joy, which will make children, teenagers, parents and grandparents happy.

A month of local festivals, theatrical reviews, gastronomic events, masked balls and sporting events. Every Sunday the triple cannon shot will mark the start of the party and thousands of masked people will flock to the avenues to the sea to rejoice and have fun and will invite you to do it with them. 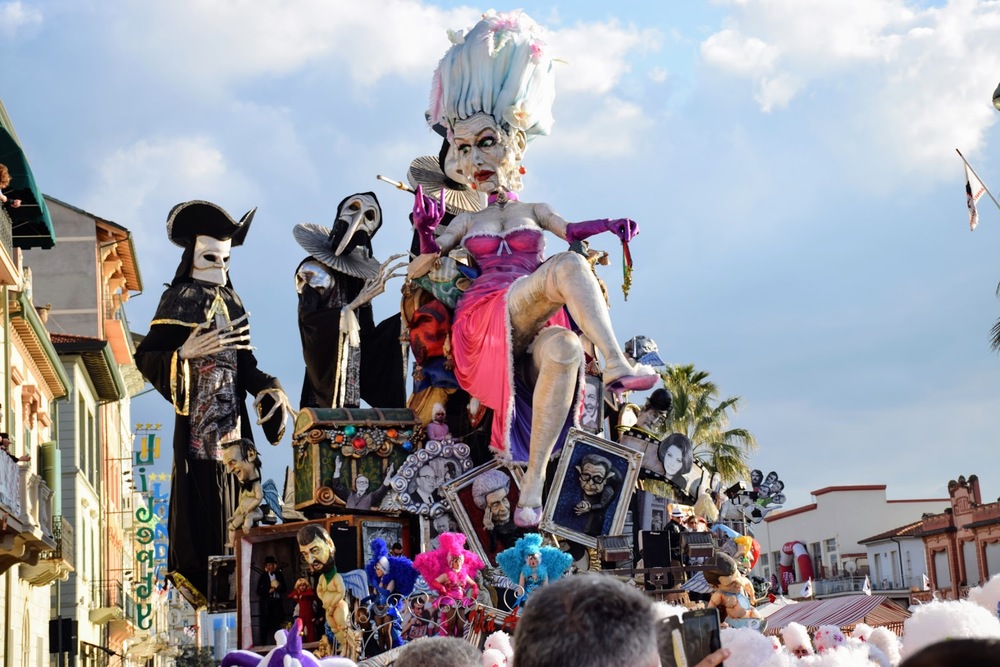 The triple cannon shot is the unequivocal signal that the party is starting in Viareggio.

Shot from the sea, it starts the float parade every time. As if by magic, the giant masks come to life with movements, music and dances. A show that is always new, exciting and fascinating. Five Great Masked Courses, concentrated in a single month of great celebrations.

The history of the Viareggio carnival

The Carnival of Viareggio as it is known today was born on Shrove Tuesday in February 1873: one of the most beautiful and grandiose spectacular events in the world.

Around the tables of the "caffe del Casino '" the idea was born among some young people of Viareggio who, tired of the monotony of a Carnival without events, went out on the Via Regia with about twenty decorated carriages, throwing confetti and candies to the right and left, tipsy with a few glasses of wine in the body, singing and dancing with that irreverent spirit typical of the "toscanaccio" that gave life to a sparkling and cheerful party born of the people, in a city born to show itself, to cheer the eyes and the spirit in a natural theater between the sea and the mountains.

At the turn of the century

began to appear the first wagons that joined the carriages, "the Four Moors" was the first ever. Legend has it that when bold young dancers who enlivened the party passed in front of the Hotel Viareggio, many good-looking ladies threw sugared almonds and beans at the carriages full of masks, who, passing back, retaliated by releasing the confetti in turn at all the windows. and terraces of inns where not a few ladies and maidens were looking out to enjoy the show, creating that irreverent and transgressive atmosphere that is experienced at the carnival even today. The throwing of candies from the floats is one of the traditions of the carnival still practiced today.

Until 1920 the "wagons" were nothing more than the carts of the quarrymen of Pietrasanta.

decorated and embellished with reeds, iron wire, jute and clay, to create the human figures and masks were artisans from Pietrasanta and real painters, but also artists such as Lorenzo Viani who collaborated as a sculptor with the chariot "the triumph of life ".

Year after year the buildings were getting bigger and more refined, and the carnival ceased to be just a popular festival to turn into a heartfelt event capable of attracting to the city a tourism eager for joy and fun, masked balls and night balls. .

the event grew more and more and began to promote itself with a magazine, "Viareggio in mask" and the bands began to find a place on board the wagon entitled "Tonin di Burio", which represented the wedding party in the farmyard of a farmhouse . Music took on a fundamental role and the first official song of the Carnival was composed, "Sulla Coppa di Champagne", it is said that the people of Viareggio asked the great master Giacomo for help.
Puccini who was a frequent visitor to the clubs of Viareggio who politely refused but suggested asking for help from an affirmed composer named Icilio Sadun who willingly agreed to put the words of the group of "carnivals" led by Lelio Maffei to music.

In 1923 and the first movements on the wagons began to be glimpsed.

the famous "Pierrot" by Giampieri and Baroni, rolled his eyes and moved his head from right to left up and down, jets of perfume came out of his mouth that a man inside the mask built in empty plaster, in precariously balanced on wooden boards, he sprayed with a blower.

You can imagine the amazement of the crowd and the roar of applause at the passage of this innovative construction that entered the annals of Carnival and laid the foundations of one of the main characteristics of the Viareggio Carnival: all movements are made by men and not by machines. Only in this way is it possible to obtain spectacular effects, on today's floats dozens of animators contribute to the animation of the float.

In those years an idea caused a furore:

The Night Ball, one Sunday evening, Viareggio experienced a unique spectacle in its life as a seaside resort, a crowd of people celebrated and danced until late at night. It was the inspiration for what are now the districts that take place in the various districts of Viareggio during the carnival evenings.

Antonio D'Arliano together with the Pardini brothers tankers had the brilliant idea, the plaster constructions were too heavy the paper applied directly to the clay when it was removed it deflated and lost its shape, alche 'they experimented something new.

They modeled a knight's head with clay, and on it they applied gypsum reinforced with pieces of bale, the gypsum once dry easily detaches from the clay creating a negative cast, which was immediately tried to fill with paper. newspaper in layers and poor glue made up of water and flour, after drying it, they discovered that the paper peeled off perfectly from the plaster and kept its shape.

A huge papier mache knight's head was watching its creators, perfectly identical to how it had been modeled on clay. From then on the tankers began to make huge constructions that still challenge the laws of physics today.

1931 was born from the mind of a young artist, Umberto Bonetti, the smiling and sly face of Burlamacco.

Viareggina mask par excellence, which, in the 1931 poster, against the background of the piers jutting out into the sea, appeared in the company of Ondina, a bather, symbol of the summer season. Taking a cue from the masks of the Commedia dell'Arte and drawing it in a futurist key, Bonetti wanted to summarize in the mask the two highlights of the life of the city of Viareggio: summer (with the white and red colors typical of beach umbrellas in the 1930s) and the Carnival. Today Burlamacco finds its place among the Italian masks in Rome at the Folklore and Tradition Museum and is exhibited in Paris at the Musée de l'Homme.

1946 after the Fascist period was the rebirth of Carnival.

The irrepressible desire for redemption of the entire city is also reflected in the opening words of the official song: "Risorgi even more beautiful in Viareggio, time is approaching with joy and love ...".

In 1949 an important satellite event of the Carnival sees the light, destined to grow over the years: it is the Carnival Cup, initially born as a city football trophy (won for the record by the Bar Lencioni) and subsequently became the most important international tournament of youth football, in which the “Primavera” teams of the most prestigious Italian and world football clubs take part and where the most successful Italian and international footballers have passed.

In 1954 the greatness of the carnival went live on RAI networks for the first time and after only 4 years the live broadcast went to Eurovision.

1960 is infamous for a terrifying burning of the hangars where the floats were built.

Instead, in 1967 it will be the turn of another novelty:

For the first time, the Viareggio Carnival offers its spectacular parade of floats even at night, on the occasion of Shrove Tuesday, the closing course. Which sees its epilogue in the fireworks, just immediately after the verdict of the floats and masquerades. A perfectly successful experiment, which from a novelty becomes a custom over the years.

In 1973 the 100th anniversary of the carnival is celebrated

The Carnival of Viareggio, Carnival of Italy and Europe, every year, hundreds of thousands of people go to Viareggio which in the period of February decreeing the international success of this great event. celebrating the splendor of a whole month of joy and fun for children, parents and the elderly, a huge party capable of making anyone smile, parades of spectacular floats, local parties, fireworks, masked balls and festivals of all kinds.

We are waiting for you, have fun and Happy Carnival.